Black plastic, garlic and a day off.

We both had Wednesday off work this week for non plot related reasons, but that didn't stop us nipping up there for an hour to do a couple of jobs. At the weekend I'd gone to a few places in search of black plastic to cover the beds in but found the prices astronomical (£1.50 per meter at Wyvale for example!) however, a chance trip to ASDA yesterday revealed they were selling it in 10m packs (1.5m x 10m) for only £2.99! We only bought one pack as a test and took it up to the plot with us where we found it covered two and a half beds perfectly. Another trip to ASDA is now defiantly in order before the weekend to buy three more packs to cover the rest. 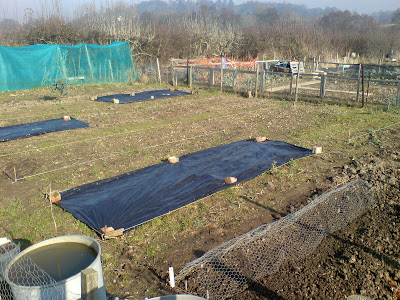 The eagle eyed among you may have spotted the chicken wire covered ground in the bed nearest the camera. This display of organisation can mean only one thing; we are now officially growing veg on our allotment. Despite being told by a fellow plot holder that it was too late to sow garlic (if the warm weather continues he's probably right) we figured that the couple of bulbs we'd bought may as well go in the ground as in the bin so we prepared a quarter of one of the dug beds ready for planting and popped them in the ground so we'll see what happens.

That was about all we had time for, it was nice to get a chance to have some time up there midweek even if it wasn't long. Roll on lighter evenings when midweek sessions will become far easier.
Posted by Paul and Melanie at 11:13

Plenty of scope there, lets hope we have a summer this year.

As long as we get some more frost, you should get a garlic crop this year.

Glad you found some cheap(er) plasltic!

You did the right thing in planting the garlic. It may produce slightly smaller bulbs than it would have done from an autumn-planting, but that's OK. They'll still taste just as good.

It's also worth knowing about the Asda polythene. That's the trouble with chain garden centres like Wyevale, they make their profits by charging whatever they like for basic sundries, knowing that most people will just go ahead and buy it anyway.

The All Seasons Gardener said...

Wow, looks like you've got great soil, nothing like our Sussex chalk - and I agree, the garlic will be fine.