Back to the plot

It's been a hectic week or so since our last post, although not much of it has been allotment related. A combination of decorating, house guests, the weather and Easter has kept things pretty quiet on the vegetable front recently. Now all of that’s over though we're focused back on the growing season and even though the weather for the next five days looks like it's going to be nothing but rain we're hoping to get stuff done in any dry gaps that may appear. 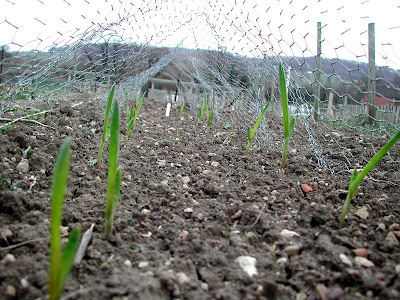 The plot survived the storms intact, and the garlic is growing away nicely as you can see. There's still no sign of any carrots in the fleece tunnel which is disappointing but I guess they'll take longer to germinate planted straight into the ground. I’ve managed to spend forty minutes or so up there the last two nights and got another half a bed dug but I'll be glad when the clocks go forward next week and we get a dry weekend as it'd be nice to spend a few hours in one block up there doing jobs. 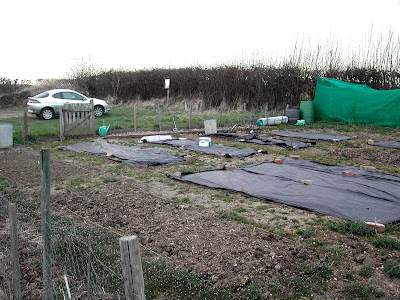 The one thing we have found though, that we hadn’t really thought about, is that although the weeds on the beds are being contained by the black plastic the paths are becoming covered in rampant weeds. Since we can’t afford to buy either bark chippings or hardwearing fabric to cover them it looks like the paths could turn into a bit of a battleground as we try to keep on top of the weeds. I spent most of my time up there tonight removing the largest of the thistles and dandelions, something I’ll do more of tomorrow with any luck. 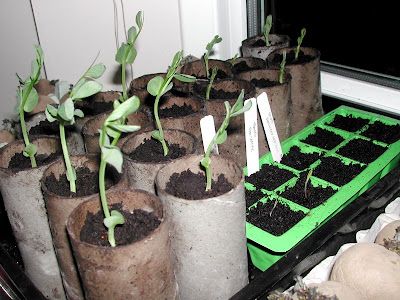 Back at home a lot of the seeds we planted a couple of weeks ago have come through, as you can see most of the peas are awake now (and look far healthier in real life I promise) and a couple of the tomatoes have finally graced us with their presence. No sign of the peppers (Tasty Grill Red F1) yet but hopefully they'll be along soon.
All being well we're going to try getting the spuds and onions in the ground at the weekend, in fact we were hoping for some advice when it comes to potatoes. We're going to plant them in trenches but we've seen various different ideas of what to put in the trench to help them grow. One idea seems to be to put manure at the bottom covered with damp newspaper; another was to simply put kitchen waste in there. We've also got some potato fertilizer for use in some tubs at home so we could add that on the plot as well if it helps. What do you think? Do you have a proven recipe for potato success?
Posted by Paul and Melanie at 18:43

I don't bother with trenching, and my potatoes have never seemed the worse for it. I just bung them in with a bulb planter, having dug the plot well with rotted manure over the autumn and winter.

If you haven't done what soilman says, you can just dig holes (a trench is too hard for me and my clay), pop in some well rotted manure/paper OR kitchen waste (with coffee grounds to deter slugs if possible), pop the spud on the top and then cover with soil. The spuds will then do a lovely job of breaking up the soil for you - they don't call them clay breakers for nothing y'know :)

Oh and beware the carrot disappearing trick under that fleece - remember my bottle cloche? Carrots came up :) Carrots then disappeared :(

I don't bother with 'proper' trenching really either, just condition and add manure to the soil a couple of months beforehand, dig a bit of a trench (takes 5 mins or so) and then whack them in at intervals. Cover them up and leave them to it.

Good luck, whatever method you choose!

I loved your garlic-eye view down on the soil! I noticed your toilet roll root trainers as well! they are a great idea and you can just plant them straight in the soil. The only problem is that I er... don't get through that many!

I'll be interested to see what you do decide to do with the spuds. I gave some unwanted seed potatoes to a friend for her garden and her mother peeled them and boiled them by mistake!!!

Cheers guys, I must admit the trench thing does sound like more work but thats how my Dad always did it and for some reason I feel like I want to carry on the tradition. I saw on Gloucester Wombles blog he's used shreded paper and manure in his so I'm thinking thats they way I'll go as i've we've got a load of shreded paper that needs getting rid of.

And Matron, don't worry neither do we but we've both been taking them home from work and getting family to save them so we've got a little hoard now! lol :)

Thanks for your message on my blog re Chillies and Peppers. As you can see, I have far too many seedlings and would be happy to share some with you. If you are happy to receive them, let me know, perhaps you have a works email I can contact for your postal details.

No idea about potatoes, actually I am waiting to see what you do before I make my move ;) But I am fairly successful with weedless paths, I just cover them in carpet.

I was lucky to inherit rather a lot of carpet with my plot but it is pretty easy to get hold of, everyone seems to have a bit spare. If you are really lucky it will have some retro 70's or 80's pattern on it and then you can give your plot a pub like feel.

Hi, I'm trenching my seed potatoes this year as the soil is only about 6 inches in places as there appears to be a layer of hardcore. No wonder everyone refused this plot! I've tried a layer of manure covered with a thin covering of soil in 2 before putting the spuds in and another had a layer of grass cuttings covering the spuds before covering with soil. The trenching is hard work but it gives me a chance to remove some stones( and bricks) but just planting straight into the soil worked fine last year.
My garlic is also really coming on but sadly the carrots even after having a double layer of fleece are struggling to emerge, although the weeds manage fine.