Not as wet as expected... Till now!

It seems like the BBC had everything a couple of days early in the end as we actually only got some drizzle on Saturday and one bout of rain on Sunday and this was after I'd gone to the effort of getting up extra early and made my way up to the plot for 9am Saturday morning.

In the end I managed to spend a couple of hours up there before the wind got up and it started to rain. At that point I figured it was time to come home before I got soaked, in hindsight I should have waited it out in the car as it didn't last too long but at least I got some things done. Along with a fair chunk of digging I managed to get some carrots (Early Nantes 2) sowed under a home made cloche.

After all the advice I got from my earlier post about all things cloche related I went for fleece as a cover which I stretched over three metal hoops. I also put another three hoops over the top pushing them through the fleece at ground level to help secure it and pegged the ends shut with bits of a broken twig. I thought it looked pretty good when I was done but I guess the proof will be in if it's still standing when I next get up there. 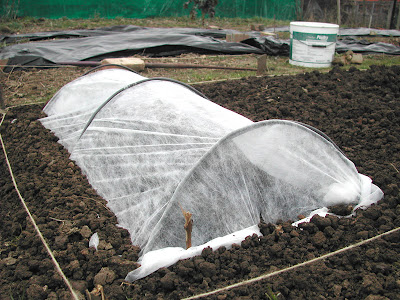 After wondering what all the fuss was about the weather over the weekend I've woken up to a Gloucester ravaged by wind and rain this morning so I'm a bit worried about what state the plot will be in now. I would put money on none of the black plastic still being on the plot much less still in place on the beds, I'm just hoping my little fleece tunnel survived. I think I'll pop and have a look on the way home, fingers crossed till then...
Posted by Paul and Melanie at 08:23

Oooh that looks like a very professional cloche you've got there. Finger crossed it's not on someone else's plot by now. I seem to have acquired a waste paper bin on mine over the weekend ...

Hope you survived the storms OK.

Saw your comment on NomeGrown about basil and just wanted to say that basil hates being handled and even hates if its leaves touch another plant, and it especially hates growing with anything other than basil, so never in a mixed pot. But it's worth the effort - mozzarella with a drizzle of olive oil - Mmmm!

@ VP... lol I hope that came from another plot and not from someone house, that'd be kind of worrying! ;)

@ Simon... Cheers for the Basil advice, I didn't know that about not liking other pants or being touched, although it has been what I've tried by pure chance. I've had 3 little pots in a propigator each with a different type of basil in and each seed in all three germinated, grew to about 2cm high then died... Same happened last year too... Must be me... lol ;)

How did everything survive down there? has it blown away?