First jam of the year!

Last year we made a couple of batches of homemade jam using fruit we bought in supermarkets and wistfully dreamed of the time we'd be able to make it from our own allotment grown produce. Fast forward about eleven months and here we are. Jam! 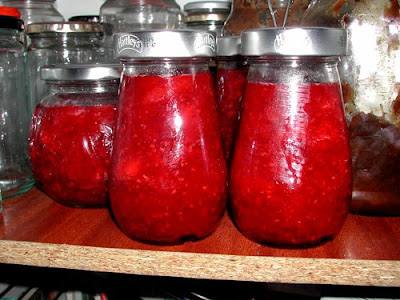 We managed to harvest approx 3lbs of strawberries on Sunday morning which we turned into five jars of jam with the addition of a few raspberries we picked at the same time. As jams go it's a little on the runny side, which I think has something to do with strawberries being low in natural pectin, but it's defiantly still jammy and tastes lovely! 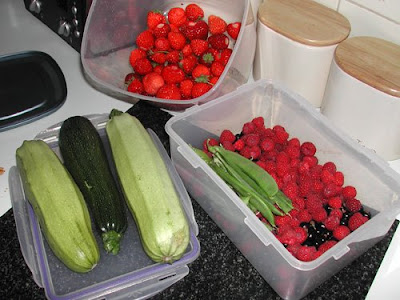 This little lot is what we managed to bring home with us from tonight’s quick watering trip. Some more strawberries, a nice load of raspberries and the first few blackcurrants of the season. There's also some rather large courgettes as you can see which seemed to have grown in super quick time since we were last up there on Tuesday.
Posted by Paul and Melanie at 19:30 4 comments:

Oooops... Sorry about that, we kind of vanished there for a bit didn't we. I'm not quite sure what happened really, the weather was a bit pants for a while and we were mega busy for a couple of weeks, then the plot suddenly seemed to have got away from us a bit and I kind of buried my head in the sand and got disillusioned about it all.

We seemed to suddenly hit a brick wall where our lack of space at home to start things off coupled with the dodgy weather, busy life (it turns out it's not ideal to plan on get married the same summer you start an allotment) and ever growing weeds meant we seemed to be smack bang in the middle of the growing season proper with a plot that had far more weeds than veg and no time or dry weather to do anything about it. Because of this I lost the will to write the blog or even turn the PC on and read other peoples because to do that would be to admit things were going wrong and I'd been so proud of the start we'd made. Of course with hindsight that’s half the point of allotment blogging, to document your failure as much as your success, so I've given myself a good talking to and we're back, ready to continue getting things wrong just as much as we get the right.

But anyway, enough of that, now we're in the second half of June and a lot of hard work in the last couple of weeks has seen us regain control of things to a degree where it's become less embarrassing and more fun again. Most plants are in, except the root veg which we seem to have run out of space for at the moment, and we've even started eating things we've grown. 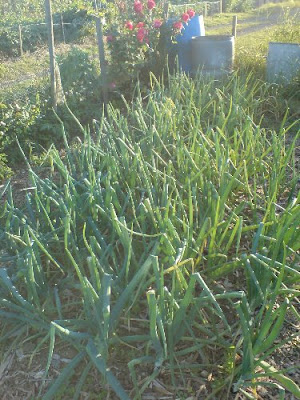 Probably most impressive (at least they get the most comment from other plot holders) are the onions. Melanie's expert planting coupled with the raking in of some Growmore just prior to that seems to have created some fantastic looking onions. We just can't wait to start picking them now. 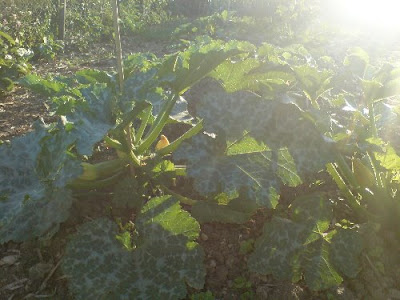 We seem to be doing ok with the courgettes too, although they haven't quite spread out as much as I was expecting (I'm sure the seed packet said leave 4-5 feet between plants) there's fruit coming on all plants and we've eaten four already with plenty more on the way. 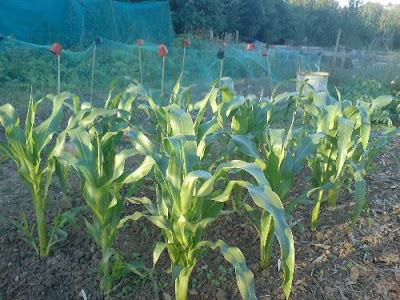 The corn is doing well too and looks like it's going to provide some lovely cobs later in the year. there's a second sowing behind this larger front lot too which will stagger the produce a little with any luck. 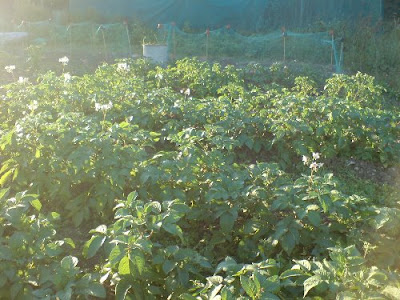 The spuds are doing ok too, I'm a little paranoid that I've not earthed them up enough and we'll die from eating poisonous tubers, but the plants look healthy and quite a few of them are flowering now. A couple of other plot holders have dug up some of their first earlies this week so we may try digging up a plant at the weekend as an experiment just to see what’s down there. 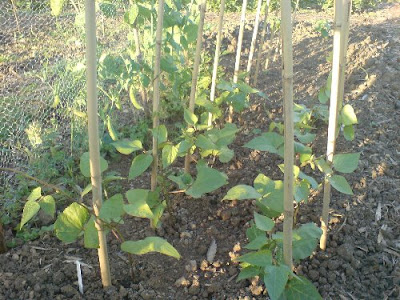 We've kind of abandoned the peas this year, I never got on top of the seed sowing and there were so many other things that needed doing. We've got some sugar snap and mange tout in there that have grown but there's never going to be large enough quantities to provide anything other than a small taste. The runner beans were another thing that almost got left too late but we have some in the ground as you can see and they're doing ok, we've got more at home that have just sprouted which should be ready for planting out in a week or so. It feels horribly late to still be growing seedlings but fingers crossed they'll all catch up and we'll get a crop, even if it's a bit late. There's some French beans down the end of this bed too, again started late but we'll see what happens... 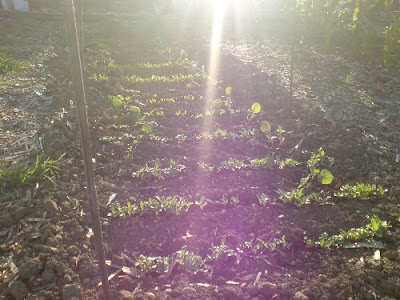 Sorry for the horrible pic here, it was getting late and sun was very low. This is the salad bed, and seems to be doing ok, again it was late getting started but now there are eight or so rows of various salad leaves all growing nicely. They'll need thinning out at the weekend I think but other than that they're good. 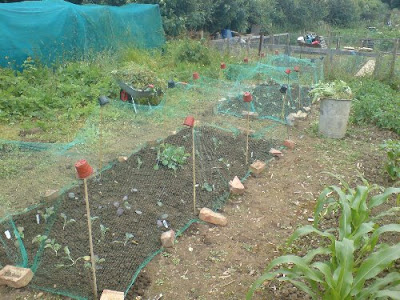 This was my project last weekend, get some brasicas in the ground. We ran out of time and space for growing these from seed so I went along to a local nursery to pick up some plants (a few different cabbages, some cauliflower, kale and broccoli) first thing then dodged the rain to get them in the ground. I was quite pleased with the netting too as it looks pretty sturdy I think. 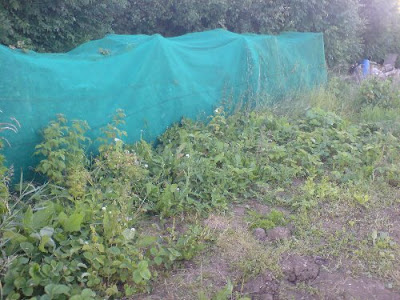 While all of that could make it look like a huge success some parts of the plot are less impressive. The strawberry patch we inherited has been pretty much left to go wild as you can see which loos horrible but we simply didn't have the time to keep it tidy this year as well as do everything else. The one good thing is the weeds don't seem to have stopped the fruit growing and we've harvested probably around 10lbs so far, most of which has been frozen ready for jam making. Also a horrible mess is the fruit tunnel, it's suffered the same fate as the strawberry patch and the confined space has made the weeds even more impossible to deal with. We're still getting a crop of raspberries in there but actually getting at them isn't easy and knocking this all down and rebuilding it with more space and a paved path through the middle this is defiantly number one on my jobs for the Autumn. 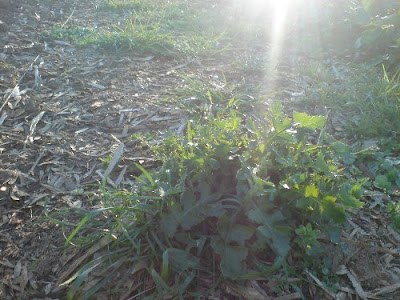 The wood chip that covers about two thirds of the plots path is also not working quite as well as hoped. Weeds are still growing through it and keeping the paths clear was proving a pain till I decided to abandon it for a few weeks and concentrate on getting all the veg in and started. To be fair to the wood chip it's kept the paths clearer than if it hadn't been there at all but I think there just wasn't enough of it to be able to stop all the weeds. It's another lesson learned and perhaps we'll collect it all up and do something different next year, we'll see. 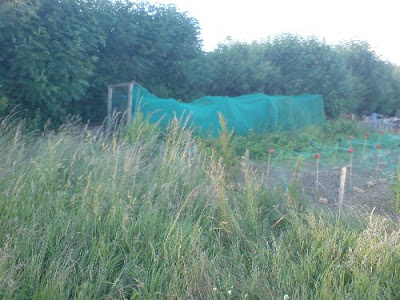 Most embarrassing of all the messy bits however is the state of the grass around the plot. Although not technically 'on' the plot it looks a state and I'd love to be able to keep it nice and tidy. But, with no power point my mower and strimmer from home won't work so I'm trying to keep an eye out for someone using a petrol strimmer or something so I can ask to borrow it. Till then I try to ignore it but it does worry me that it's such an eye sore.
So that's that. All up to date and now we're back in blogging mode we'll be back doing smaller updates as often as we used to. Thanks to everyone who left messages asking where we were and checking we were ok, they're much appreciated. Now I'm off to catch up on all your blogs, speak to you soon!
Posted by Paul and Melanie at 13:50 10 comments: