A picture challenge response and a query...

A couple of weeks ago I was asked by Jo from 'The Good Life' to take part in a picture challenge. The idea is to go to where your pictures are stored on your computer, find the eighth folder and pick the eighth picture inside it. Then post it on your blog along with a description of what it is and where it was taken. 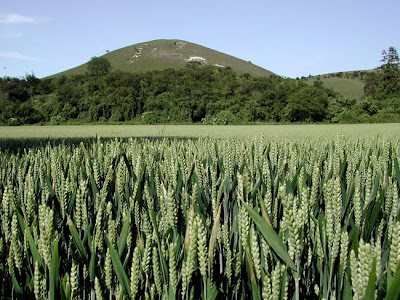 It was taken back in the spring of 2006 at a place called Barton Le Clay which is near to Luton. I was spending one of many weekends in that part of the country visiting Melanie in the days before she moved up to live with me in Gloucester and we'd gone for a walk and picnic at Barton le Clay one afternoon. Our walk had taken us along the edge of a wheat (I assume it's wheat...) field and I took this shot of the green wheat against the green hill because something about it just caught my eye. I obviously had every intention of 'doing' something with it and printing it out at some point because there are a few Photoshop'ed versions of it laying around in the same folder but this is the original.
On another note, has anyone else tried growing Pak Choi? I've got about 12 growing on the allotment at the moment but all of a sudden three of them seem to have bolted and gone to flower and I don't know why.
They're by no means fully grown yet so it's not that they've been in the ground too long, I've been watering them every couple of days (unless it's rained) yet they've still bolted like this. I've never grown them before so perhaps I've done something wrong. I did read somewhere online that they prefer the cooler ends of the growing season but the seed packet didn't mention that..
Has anyone got any personal experience with them?
Posted by Paul and Melanie at 13:17 6 comments:

All systems go in the greenhouse...

A bit later than promised here's the greenhouse update I mentioned a while ago. If there was one thing last year taught me it was that you can't really fit seven tomato plants, three cucumber plants, three pepper plants and a couple of chilli plants and a melon into the growing bed of our greenhouse, and then be surprised when some of them fail to flourish. So, this time around I'm planning a less is more approach to greenhouse growing. 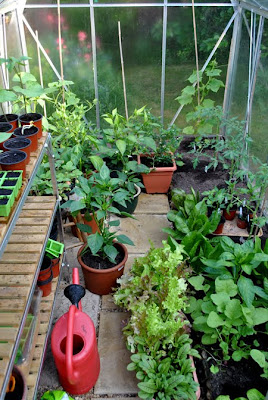 Ok, so it actually does look a tad crowded in there at the moment. This is mainly because we also decided that unlike the previous two years we'd grow all our salad leaves, lettuces and radishes in the greenhouse rather than the allotment. It was simply too much hassle having traipsing up to the plot every time you wanted a few leaves etc, so, this year all salady things will be housed under glass a few feet from the kitchen door. As you can see we've got some little gem lettuces well on the way along with a first sowing of radish and a few Radicchio in there as well. 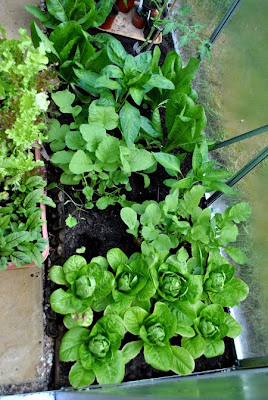 There's also a whole bunch of mixed salad leaves and some sorrel growing in a container. They've grown far better than I expected and I could probably have done with only half the amount really, but you shouldn't look a gift horse (or plant) in the mouth, I'd be moaning if they'd come to nothing. 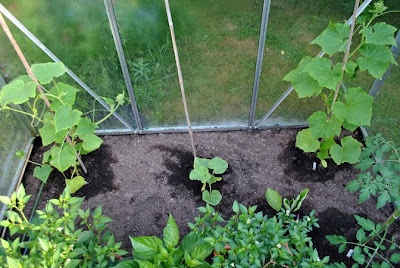 The rest of the space is taken up with a couple of pepper plants, three tomatoes (annoyingly I've got no idea of their variety despite having grown them from seed thanks to an accidental labelling mix up), a couple of cucumbers a melon and an aubergine which I impulse bought from a garden centre and have no idea what I'm doing with. There's also a load of chilli plants sat on a tray waiting to be potted up alongside their more established brothers who are taking up most of the floor space. More on my slight chilli overload in another post. 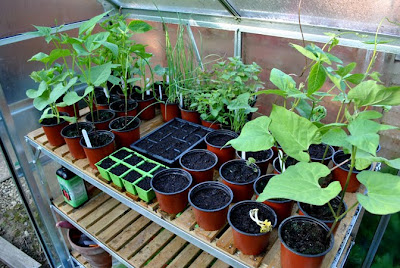 On the other side of the greenhouse there's the current batch of seedlings (climbing beans that are ready for planting out and some freshly sown chard and spinach as well as a few extra peppers and melons that I'm not quite sure what I'm going to do with as I've run out of room) along with some herbs and spring onions growing in pots.

Once the beans go up to the allotment at the weekend I'm going to sow all my brasicas too so there could be some space issues in the next few days...