It stopped raining for five minutes so....

It actually stopped raining long enough for me to pop up to the plot on the way home from work yesterday and do a bit of weeding, something that proves much easier after a bit of rain I have to admit. It’s surprising what 45 mins weeding can achieve because afterwards the paths looked almost clear which gave the plot a much nicer look to it. 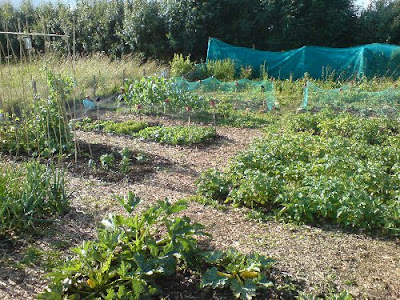 My other reason for popping up there was to collect some salad leaves for dinner. I never got round to thinning out the salad which has led to some pretty congested rows but I figure if I pull up whole baby plants rather than just cutting the leaves off so they re-grow that should have the same effect and allow us to eat the ‘thinnings’ so to speak. 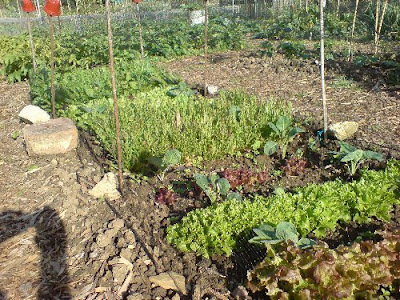 (Those are sprouts in between the rows of salad, I ran out of space in the brasica bed so thought they could go in the gaps here…)

The brasicas we planted a few weeks ago have all taken well to their new home and are thriving. Almost better than that, my homemade netted cages are also all still standing which I’m quite pleased with. 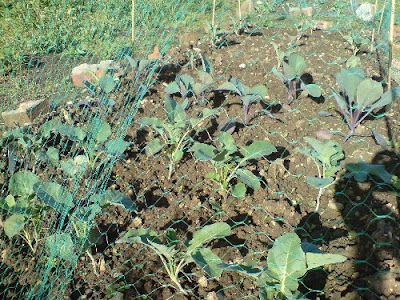 The tomatillo we’re experimenting with (we’d never heard of it before we saw the seeds in a shop) seems to be doing well too, or at least one of the two plants is, so best concentrate on that one for now… 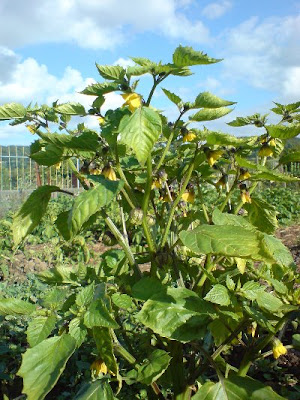 It looks like it’s going to rain from today all through to Sunday according to the weather forecast so this could have been the only plot time we get this week, fingers crossed for another break in the clouds soon…
Posted by Paul and Melanie at 13:47 10 comments:

First spuds of the year and some baking... 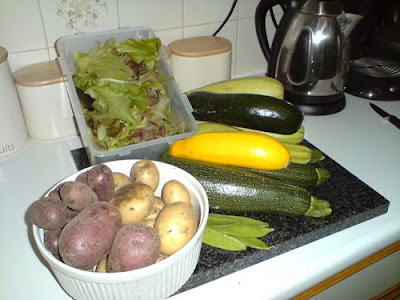 It’s been pretty wet here this weekend but we managed to get up the plot on Saturday to pick the first load of salad leaves dinner and have a little look at what was under the two rows of early potatoes.

It was lovely to have the first spuds of the year although we’re probably going to leave the rest of the rows in for a couple more weeks as there were some nippers who looked like they could grow a bit more before we unearth them.

As you can see we also found another big batch of courgettes which prompted us to give some of the recipe ideas you all suggested after our last post. The two we decided to try first were the Courgette, Tarragan and Lemon bread suggested by VP from Veg Plotting and the Courgette Cake from Lucy over at Smallest Smallholding.

As you can see they both turned out looking rather yummy. We had to try a slice of the cake while it was still warm as it smelt so good and can report that it does indeed taste just as good as it looks. We’ve resisted the urge to try the bread as we’re planning to have some for dinner with some lovely thick soup.

Thanks for all the other suggestions, we’ve logged them down and will give lots of them a go over the next few weeks and let you know how we got on.
Posted by Paul and Melanie at 15:30 5 comments:

What to do with courgettes...

It's started, the courgette glut! We're now harvesting two or three courgettes every couple of days and the number are only going to increase once all six plants start producing...

So, I was wondering, what do people 'do' with courgettes? We've put them in pasta sauces, cooked them with tinned tomatoes as a side dish and even cut them lengthways and roasted them in the oven. But there must be more to do with them surely...

I'm sure I saw Jamie Oliver slicing them up really thin and putting them in a salad while still raw. Has anyone tried that or got any other good suggestions on what to do with them?
Posted by Paul and Melanie at 13:59 15 comments: