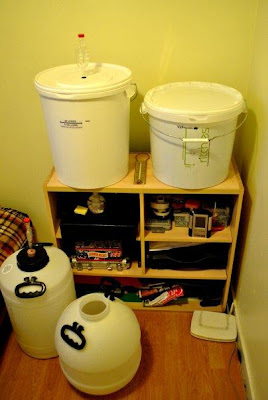 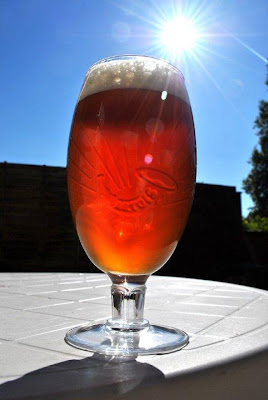 We've had a go at both beer and wine so far, both from kits, with the first keg of beer (Woodfordes Wherry) now clear and ready to drink while the wine (Beaverdale Merlot) is safely bottled and maturing. We've also got a few gallons of parsnip wine brewing happily away made from the last of our parsnip harvest and a second beer (Woodfordes Admiral Reserve) should find its way into a fermenting bin over the weekend.
While the act of brewing itself has been a hugely enjoyable exercise I have to say I wasn't quite sure what to expect taste wise when it was all ready. So far however, I've been pleasantly surprised. The Wherry, described as a 'session ale', is worryingly drinkable and wouldn't seem out of place in my local. The Merlot too isn't bad either, although the bottle we tried was still perhaps a bit too young as its recommended that wine should be left to mature for over six months.
This summer we're planning to try brewing some other wines from either home grown fruit (a strawberry wine is top of our list...) or foraged goodies from around the local area. It'd be nice in the future to move away from kit beers into full grain brewing too but that’s quite a leap in terms of skill, equipment and time from what I've read so we'll perhaps hold off on that for a while.
So far though, our new brewing adventure is all going really well.
Posted by Paul and Melanie at 13:10 5 comments: 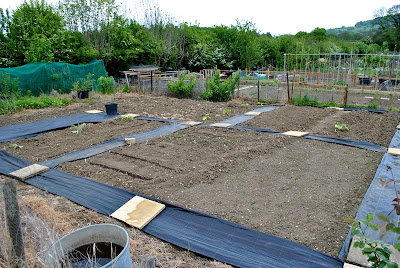 As you can see things are looking quite nice and tidy at the moment up on the allotment. We invested in some more paving slabs and weed suppressing fabric for paths this year so we're able to divide up the ground better as we plant. Over on the far side of the plot the fruit area is still as overgrown as ever, the plan now is to wait till the strawberry patch has fruited before digging up the whole lot, netted tunnel and all. Then we can start again with a new, much larger, covered area for fruit. 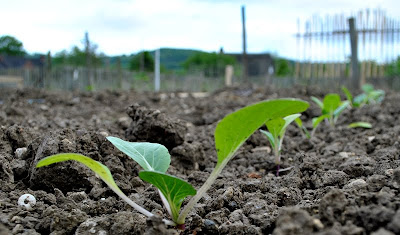 We're trying a few new things this year, first up is some Pak Choi. These were started off in the greenhouse before being planted out last weekend and they seem to have survived the transition pretty well. I probably over did it with about 16 plants since they'll all be ready at the same kind of time but fingers crossed they'll keep in the ground long enough for us to use them all. 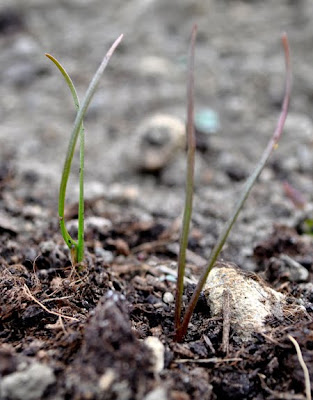 We've also planted a couple of rows of Scorzonera which we picked up at random one day while browsing through the seeds at a garden centre. They're just starting to come through and look kinda weird at this stage. No real idea what we do with them or what they taste like (I did read somewhere you treat them a bit like really thin parsnips though) but it'll be fun finding out. 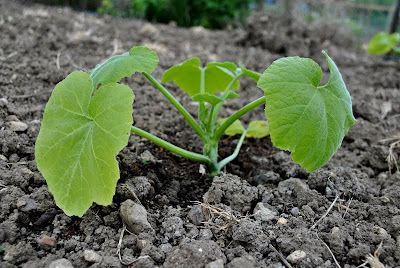 We've gone a little squash crazy this year too; we've got seven plants in the ground at the moment with another couple still in the greenhouse. There's a mix of about five different varieties (I've lost track a tad) in there because every time I saw a new interesting looking variety I couldn’t stop myself buying a packet of seeds. I know we're going to have way too many come harvesting time but I love the look of all the different shapes, sizes and colours so all being well friends and family will take a few off our hands if it all gets a bit much in the autumn. 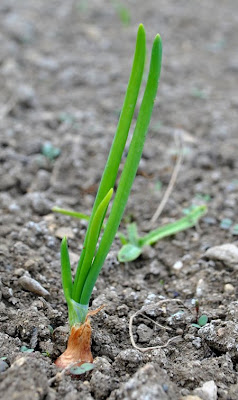 The onions, despite going in late, are doing their very best to catch up and I'm hoping come harvesting time we'll never know they were late starting. Still no sign of the early potatoes though which perhaps means they're doing a less impressive job of making up for their late start.
Other than all that we've also got a few different Peas, Swede, Kohl Rabi, Carrots and Beetroot in the ground, all direct sown, and there's signs of life in all of them which is good. The key now is to kick on and keep this up unlike last year where it all went wrong at about this point...
Greenhouse update tomorrow all being well...
Posted by Paul and Melanie at 13:10 6 comments:

Hello again, is there anyone still out there?

Ok, so it's been a while, almost an entire year to be precise. I'd love to say the reason for such a lack of updates is that we became allotmenting heroes and simply didn't have time to post amidst the whirl of plot based activity. However, the reality is that choosing, buying, building and using the new greenhouse left us horribly behind on allotment jobs at just the wrong time of the year meaning we didn't end up sowing half of the thing we'd planned to. To make matters worse then I tore my knee ligament in July while playing football which pretty much kept me off the plot for the rest of the summer. Once I was finally able to get back up there most things had succumbed to the now overwhelming amount of weeds and the whole thing looked in a sorry state. This coupled with the dreadful summer weather pretty much the last bits of our enthusiasm and so, I'm sad to say, we all but wrote off the rest of the growing year.

There were a few small victories however, we harvested a good crop of broad beans and early potatoes before things went wrong while our onion and beetroot crop, although suffering from having to compete with the weeds, still provided a good few jars of pickles. We also managed to harvest an impressive ten squashes from the solitary plant that had survived and prospered despite my neglect. 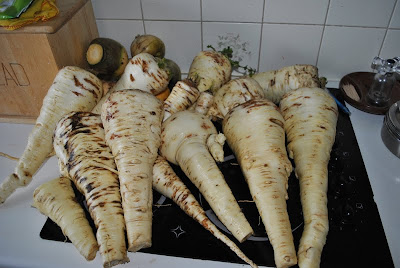 Best of all however were the parsnips. All the care and attention I'd given them in the early part of the year had clearly stood them in good stead and they came through the summer largely unaffected by the lack of attention to produce some amazing roots come winter. This picture is of the final few roots we picked early this year which, despite looking a little got at round the edges, were used to make a whole batch of Parsnip wine before ending up in the freezer ready for use in roast dinners and soup for the rest of the year.

The greenhouse too was pretty much a success, Admittedly a mixture of inexperience and over enthusiasm meant we crammed a bit too much in there causing it to get a tad overgrown in late summer but we managed to harvest plenty of tomatoes, cucumbers and chillies all the same.

Which brings us to this year and our plans to make our third allotmenting year our best. The seemingly continual snow and rain stopped us from getting the early start we wanted and once we'd finally got back into the swing of things and cleared all the weeds left from last year we were already well behind. Our early spuds and onions in particular went in the ground about a month late at the end of April. However, the fact that we now have the greenhouse at home meant that we were actually pretty up to date with seedling etc despite what the allotment itself actually looked like. So, now it's all systems go and everything, fingers crossed, is feeling unusually in control going into the second half of May.

Anyway, I'll do a current allotment update post tomorrow along with some pics followed by a greenhouse one with more pics and we'll go from there with updates hopefully back to every couple of days like they used to be...