It was a quiet weekend allotment wise, we were away for the weekend visiting friends so didn't get to take advantage of the good weather and get any work done. However, just because we weren't physically up there didn't mean we'd stopped thinking about it.

The end of the plot that contains the increasingly rickety fruit tunnel, a million strawberry plants run wild, a black current bush and a couple of rhubarb crowns was the part of the plot we effectively left to nature last year and although we harvested a massive load of strawberries and raspberries by the end of the summer it was pretty much a weed ridden mess.

This year we want to get it under control and the first step is going to be to abandon one half of the strawberry patch since it's become ridden with couch grass. The plan is to simply cover it with some weed suppressing fabric and turn it into the seating area we've wanted since day one complete with some pot grown fruit bushes (just to keep the space productive) and, of course, a seat.

So, late last week we ordered a couple of fruit bushes from the lovely people at Victoriana Nursery and last night I came home to find an exciting looking parcel awaiting me. A flurry of unpacking later and I had a healthy looking and surprisingly large Red Currant bush (Rondom) as well as a nicely potted Blueberry bush (Bluecrop) all safe and sound and guarded by one of the cats. 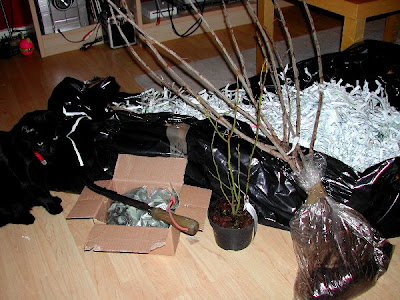 As well as the fruit bushes we also ordered their 'Asparagus Lovers Kit' which consists of ten crowns and a scary looking asparagus knife as now seemed a good time to start the asparagus bed we've promised ourselves since day one.
The plan for the weekend is now to get the two new fruit bushes up to the allotment and pot them into the big plastic potato tubs we used in the back garden last year then prepare and plant the new asparagus bed before making a start of the seating area.
Assuming it doesn't rain or snow of course....
Posted by Paul and Melanie at 13:33

Gary and Jen, and Ruby and Peter said...

I always enjoy getting parcels from Victoriana,they are always well packed. I can also re use most of the packaging - the shredded paper for example goes straight into the compost bin.
Your order is virtually the same that i ordered earlier this year - spooky !

Hi Guys, I'm pleased you're back. I've just put in a few black currants in my fruit dome. I had a red currant but we weren't too bothered to keep it - if you don't cover it the birds will strip every single berry, and they got so fat on mine they actually broke the branches with their weight.

Love your Victoriana Nursery pics, their plants and seeds are wonderful. We grew Blueberries last year and they where great, we had a Bluecrop which i later found out needs another blueberry to cross pollinate with, we brought a Goldtraube which worked brilliantly, also means we got twice as mean berry's!