Well that was a good weekend. As ever two days was nowhere near enough time to get all the jobs jobbed but hey, there's always the next one.

Saturday was ‘Allotment Day’ so first we took my parents up to see the plot under the guise of asking them for help identifying the fruit bushes in the netted tunnel but also because we wanted to show it off. After the Ooooh’s, Ahhhh’s and looks of envy we all crammed into the fruit tunnel to have a mooch. The slightly inconclusive verdict was a number of confirmed gooseberry and blackcurrant bushes as well as some as yet unidentified specimens that could be anything at this stage. We’re thinking the plan should be to leave everything as it for now to see what ends up growing, then we'll know what we're dealing with for next year and can prune etc as required come the autumn.

Since it was turning into a lovely warm day once my parents had gone we popped home to make up a little picnic and brought it back up to the plot to eat. I think we probably looked a little strange picnicking on the allotment in the middle of February but at least it shows we're keen and it was far nicer than eating sat inside at home.

Then it was time to graft, Melanie set to work clearing all the old brasicas that had been left in the ground. There were two long rows of old purple sprouting and a few manky looking cabbages as well all to be pulled up. These were then cut up and put into the compost bin leaving the ground nice and clear apart from one lonely looking purple sprouting plant as there was a decent looking final crop almost ready on it.

While she was doing that I set to work marking out the rest of the beds to join the two we'd done last weekend. Using my trusty measuring stick (a bit of bamboo with marks on it at one foot intervals) I soon had them all marked out neatly with string allowing us to get a good idea of how it would all look when finished. The final plot design has given us a total of seven 4' by 13' beds, a slightly larger 5' by 13' one for some early potatoes and a big double sized one, 11' by 13', for our main crop.

Talking of spuds, here's all the ones we've got chitting at home, some are for tubs in the back garden but even so I think we’ve gone a little overboard. We can't wait to get them in the ground as all that window space will be needed for seeds soon. 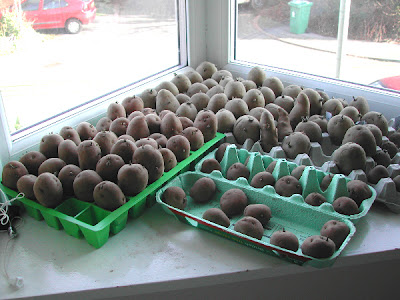 Next it was time to move the bit of manure we collected last week to somewhere a tad more useful. We gave the rhubarb crown a good covering and covered one of the dug beds in a layer which left us just enough to fill a couple of polystyrene tubs we'd brought from home which we're going to use to try and grow mushrooms in the garage. 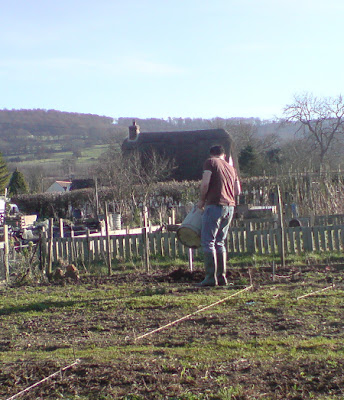 The light was beginning to go by now so we cleared up all the rubbish we'd generated (mainly dead runner bean plants which had long since lost any goodness) and took it down to the communal dumping area, again wishing we had a wheelbarrow. 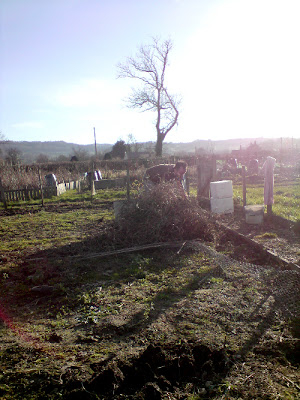 Then it was home time, and the end of a really enjoyable afternoon on the plot. Looking back it seems like we didn't really 'do' much in the four hours we were there other than clearing stuff and marking out beds, we didn't even dig anything for a start. But, we've now got the plot completely clear (bar weeds) and our plan for the year, in terms of beds etc, all marked out and ready to go so it means we're ready to hit the ground running next time with the digging. Here's how things look now anyway... 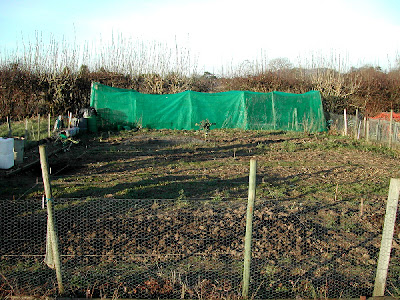 And, just cos I can't be the only one in the pics here's Melanie in her lovely pink wellies as she tells me not to take a photo of her.
;) 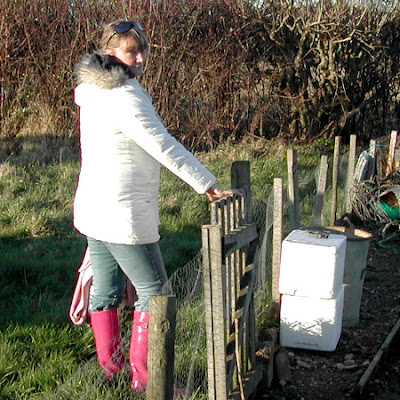 hiya, allotment's looking fab. We've almost got purple sprouting coming through ourselves! Looks like you've got enough potatoes there to feed an army!

Amazing how the allotment just eats time!!! I love the pink wellies and sunglasses ... every allotment holders essential accessories! :)

Your allotment is lovely and flat and you are so very lucky that it has been well tended in the past. Isn't this time of year exciting? I wish you good luck with your produce, lets hope its a better growing season than last years. I will follow your progress with interest.