Anyone seen the sun?

Aside from the progress with the spuds I mentioned on Saturday it was a pretty slow weekend thanks to some thoroughly cold and gloomy weather in the Gloucestershire area. That didn't seem to stop the seeds we sowed last weekend from making an appearance though. 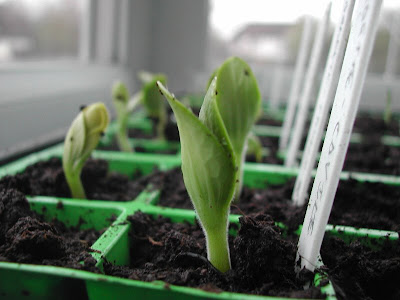 At least one of most things has come through now, we're only waiting on the vegetable spaghetti and the tomatillo to pop up which I guess isn't surprising given their preference for warmer climates. The courgettes have fairly shot on though and most will be able to be potted on in the next couple of days all being well, the corn is doing well too, 10 out of 15 germinated so far.
No sign of any tomatoes from The Great Tomato Project 2008 (from now on to be called TGTP 08 I think...) but they only got sown 5 days ago so I'm perhaps getting a tad impatient with them. The second batch, the cherry varieties, should be going in later this week when we have some propagator space and with any luck the weather will have warmed up a bit by then as I'm sure it's still pretty cold even in a propagator at the moment.

I was pleasantly surprised last night to discover this blog had been given it's first award. dND from the lovely From Here To Eternity has awarded Growing Our Own an 'E for Excellent' which was very nice of her. I think the rules are I now have to award it to any blogs I feel deserve the accolade, an almost impossible task when you consider the quality out there. I'd love to award it to everyone linked on my blogroll as they're all ones I read avidly but if I had to pick just one I'd award it to Fork it... A Gloucester Allotment. Not only is it a great read it's also the first allotment blog I ever read and the one that inspired me to try my hand at blogging.
Posted by Paul and Melanie at 13:38

Congratulations! Not only are you having some seed success but you have won your first award, hopefully the first of many :)

Congrats! And a big thankx for the blogroll link. Keep up the good work :)

Looking good! Are they on your windowsill? Very impressive. And congrats on the award!

WOW does that mean you have given me the award? I'm not sure if I read that right? I'm chuffed to bits!

lol It does indeed Mr Womble, and very well deserved it is too :)

And yeah, all on windowsills at the mo Mrs Be, need a bigger house!