I take back what I said on Friday, we did manage to get on the plot this weekend after all. We came home after our shopping trip on Saturday to find a message from the man who used to have out plot saying he'd cleared everything he needed from it now so it was now completely ours. Yay, yay and thrice yay!

So, when Sunday morning dawned, cold and windy but thankfully rain free, we pulled on our gardening clothes and made out way up to the plot to see what was what. Everything was much as we'd left it; all that seemed to have gone were the rickety netted frame from over the brasicas and the wheelbarrow. More importantly the netted fruit tunnel remained intact and now had a key hanging from the padlock and the intriguing locked box was still there, although it was now simply an intriguing box.

First job was obviously to see what was to be found in the storage box, the previous owner had said he’d given away most of his tools so we weren't expecting much. However, inside were three different hoe's, a sturdy looking fork a, bag of twine and numerous sticks and poles which could be used for, well 'something' I'm sure. Not bad really, especially since a hoe was the one thing we didn’t have.

Next we had a quick tidy around the plot, picking up any odds and ends we wanted to keep and stowing them in the storage box. Then it was down to the real work. We were aiming to mark out and dig the first two beds so the first thing to do was to clear out the long rows of carrots and beetroots that had seemingly been left in the ground to rot over winter. There were loads of the things; most of them tiny and all packed close together where they hadn’t ever been thinned out. Once they were all removed we marked up the beds, both 4' by 13', with some string then set to work weeding and digging them.

Here they are. They don't look it in the pic but honestly, they're the same size. Two down, eight more to go! 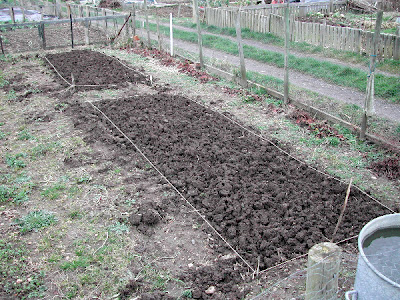 Not many other plot holders had braved the freezing winds but we did have a chat with a friendly woman who introduced herself and said congratulations on being given such a lovely plot. She also mentioned that the local stables dropped manure off at the top of the site and it was first come first served when they did. It looked like there’d been a delivery recently because there was still some left, so, cursing the lack of wheelbarrow, we used a big metal tub thing we'd been left to drag a bit onto our plot. We'll probably take half of it home to grow mushrooms in (Melanie's little project) but the rest will go on the plot somewhere. 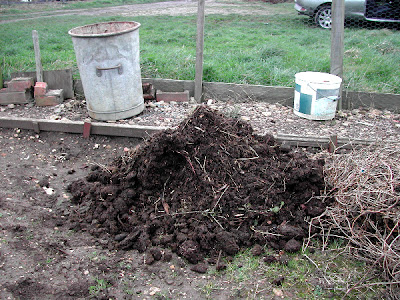 A combination of increasing hunger and our muscles complaining we'd tortured them enough told us it was probably time to call it a day. So, after a quick trip to Homebase and back to buy, then fit, a padlock for the storage box we packed up and went home. Cold, aching and knackered but satisfied that we'd at least made a start on things. Roll on next weekend!
Posted by Paul and Melanie at 10:34

Wha hey! And I bet you had big smiles on your faces too, in spite of all those tired muscles :)

Congrats on finally getting started on your plot :) Those are some nice beds and that small pile of manure is like gold to them! Hope you enjoy meeting everyone in the plot community ^^ it's part of the fun.

thanks for your kind comment on my blog! Your plot looks great - and full of potential! will look forward to seeing how you get on this year. All the best, Mike

Wahey! Glad you're all in, bet that feels great. I tend to keep buying hoes from the car boot at the racecourse, and they keep having woodwworm and breaking! You gonna get some veg in soon then:)

Looking good!! I do love to see a freshly dug bit of soil!!

You must be well pleased at how much you got done, despite how you felt at the end of the day. Well done!

Cheers everyone, should be even more progress made this weekend all being well :)

@ VegMonkey: I may start some seeds off over the weekend too if I can tear myself away from the digging... ;)